The UK’s Attitudes Towards Women In Sport

Insure4Sport has conducted a national survey focusing on attitudes towards women in sport – and it uncovered some incredible findings.

Whilst the UK widely acknowledges that more should be done to promote women’s sports, sexism is still rife in the competitive sport industry, particularly among the older generation. What is arguably even more concerning is that some of the most damning responses about women in sport are from female respondents.

Let’s explore the survey’s results in full, and assess just how much progress is being made in championing the role of women in sport…

The survey showed that both men and women clearly recognise inequality within sport. The latest prize money statistics illustrate just how much inequality exists within certain sports, with football being the chief culprit. 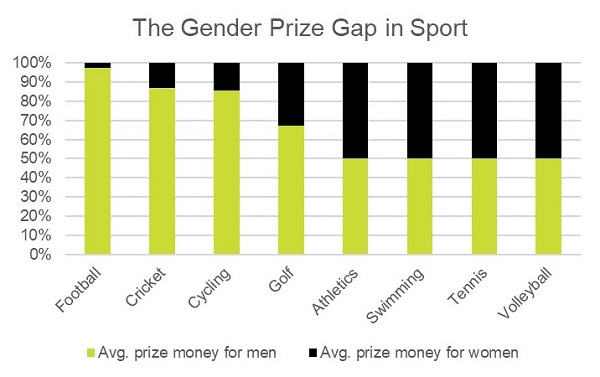 While other sports don’t come close in terms of inequality, the disparity in prize money is still a cause for concern. The prize gap between male and female golfers is £528,158, while male cyclists receive nearly six times as much in prize money as female cyclists.

However, a number of major sports lead the way in promoting gender equality. The average prize money is the same for both genders in tennis, volleyball, athletics and swimming.

Of our respondents, more than three quarters of women and 68% of men think there’s an inequality. Furthermore, nearly a third of women prefer watching men play sport, indicating that it’s not just male spectators holding female sportspeople back.

Worryingly too, only 7% of respondents prefer watching women play sport. This reiterates that a lot of work still needs to be done in bridging the gender gap within sport.

The UK’s stance on key issues

As you might imagine, the subject of whether sportswomen should get the same money, coverage and general recognition as sportsmen divided opinion.

Regarding salaries, one quarter of respondents think male footballers deserve greater pay than their female counterparts. There was quite a big difference in opinion on this subject, with almost 40% of men agreeing that male footballers should get paid more compared with just 14% of women – a difference which highlights just how complicated tackling sexism within sport could prove. Interestingly, only 18% of those under 25 agreed that male footballers deserved to be paid more than female footballers, as opposed to 28% of those aged 35 or older – signifying that the younger generation are more open-minded regarding sportswomen’s rights to equal pay.

This seismic gap still exists despite the English women’s football team consistently outperforming the men’s team at major championships. That said, the responses we received on prize money were very encouraging, with nearly three quarters of respondents agreeing that the Wimbledon winning prize fund should be the same for men and for women.

However, there is clearly a feeling across the country that women are not given the same opportunities as men to become sportspeople from an early age. Less than half of our respondents think girls receive the same amount of encouragement as boys to participate in sport at school. What is particularly notable is that 36% of under 25s (people who have recently left school themselves) think girls get less encouragement to play sport – implying that gender inequality within physical education is an ongoing issue.

When it comes to airtime, an incredible 40% of those surveyed don’t think that women’s and men’s sports should get equal TV coverage.  Many people don’t think female and male pundits should get the same amount of airtime, either – over a third of respondents do not agree the opinions of female sports commentators and pundits are as valid as those of their male counterparts.

The assessment of women’s capabilities as sportspeople by those aged 55 or over is also a big talking point. Only 19% of respondents in this age bracket think women have the potential to be better than men at most sports, compared to 44% of respondents aged 16 to 24. Again, this illustrates a greater open mindedness among the UK’s younger demographic.

What our viewing habits say

In terms of viewing preferences, there is a strong bias towards male sports – particularly those which have historically had a strong male presence, such as football and rugby.

When asked which sports they watch, 44% of respondents stated they watch football, yet when we specified women’s football this fell to just 17%. Rugby also has a strong male bias –  23% of respondents watch rugby, but just 6% watch women’s rugby.

Of the 22 sports we included in our survey, there were only two sports where female events are more likely to be watched – volleyball and hockey. These results reinforce the status quo around volleyball and hockey being viewed as “women’s sports”, again implying sexism among spectators. They could also have something to do with the recent success of Great Britain’s female hockey team, which won its first ever Olympic hockey gold medal in 2016.

In keeping with tradition, tennis, swimming and athletics are the most watched women’s sports. Of the world’s most popular sports, swimming and athletics showed the least disparity between how many people watch the sports as a whole versus how many watch the female versions of the sports. 21% of those we surveyed watch athletics, while only 4% fewer watch female athletics. Swimming demonstrated an even smaller difference – 15% of respondents watch swimming, whereas 13% watch women’s swimming. Tennis also showed a low male bias, with just a 6% difference between how many people watched tennis and how many watched female tennis.

Clearly, these sports are more widely perceived as unisex sports than the likes of rugby or football. This perception most likely stems from the fact that tennis, swimming and athletics have produced some of the most high-profile female sports stars of all time, such as Serena Williams, Missy Franklin and Dame Kelly Holmes.

So, we’ve established that some women’s sports have a much greater following than others. But why exactly is this? Well, we put this question to the nation – and got back some rather interesting responses.

Perhaps unsurprisingly, the main reason people don’t watch women’s sports is a lack of television coverage. This demonstrates that, more often than not, the lack of engagement with female sports is not down to personal choice.

Strangely, the third most popular answer given by male respondents was that women are inferior at sport, both in terms of skill and strength.

We’ve highlighted the top 10 most controversial responses we received from both men and women – and while these are all contentious responses, some of the answers from female respondents are truly astonishing…

Top 10 most controversial responses from men

Top 10 most controversial comments from women

Do these opinions affect participation in sport?

Sadly, according to our survey – yes.

Nearly three quarters of females don’t regularly take part in a sporting activity. What’s more, a staggering 92% of females have never considered a career in sport. 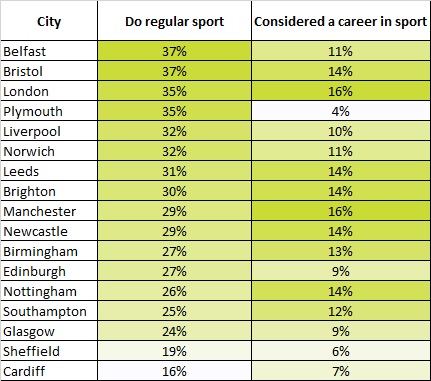 Of those who don’t regularly take part in sports, nearly a quarter cited a lack of enjoyment or interest – which only further highlights the importance of encouraging female participation in sport.

The chief offenders when it comes to sporting participation are Sheffield and Cardiff. Only 6% and 7% of respondents in these areas respectively have considered a career in sport.

So what does this survey tell us?

That there’s still a long way to go in order to tackle gender bias, sexism and inequality within sport.

Lizzie Deignan, Olympic medallist and ambassador of our sister brand Cycleplan, said of the findings: “While this survey shows that attitudes towards women’s sport are changing, particularly amongst the younger generations, there is obviously still a long way to go to achieve parity in sport.

“Hopefully greater coverage of female participation, combined with more national campaigns such as This Girl Can, will continue to change attitudes towards women in sport for the better. The more that other women see female role models the more I hope women all of all ages will be encouraged to take part in sport themselves and hopefully more people of both sexes will watch women’s sport at an elite level.”