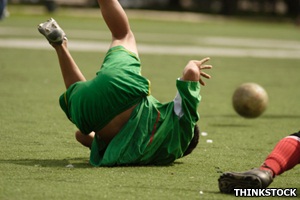 Ask any sports fan and they’ll be able to recall a particular moment when they couldn’t help wincing at the television screen. It’s the oooh when a rugby player gets flattened after receiving a hospital pass from a teammate, and the aaah when a football player pulls up short and melts to the floor nursing a torn hamstring ligament. Injuries are simply a part of sport, which is why professionals and amateurs alike come to insure4sport to get the correct sport insurance cover. Players accept the inherent dangers of participating, but it’s not always those playing an active role that end up needing treatment. We’ve found some clips online where it was the officials who took a surprise knock!

Aegon Tennis Championships 2012
It was during the final of the Aegon Championships at Queens in 2012 that Argentine David Nalbandian showed the world the rougher side of lawn tennis, when he took a determined swipe at an advertising board after losing a point. Unluckily for Nalbandian the hoarding took its revenge by cutting the leg of a nearby official – cue lots of hobbling, a fair bit of blood and plenty of booing from the crowd when Nalbandian was disqualified and the match was handed to his opponent Marin Cilic.
Watch the clip

Los Angeles Angels vs Cleveland Indians, August 2012
It was during the fifth inning of a baseball game between the Los Angeles Angels and the Cleveland Indians when umpire Greg Gibson got more involved with the action than he’d planned to. As Torii Hunter slid into safety, the player turned on the ground and his raised boot caught Gibson on the side of the head. Luckily, Hunter had opted for plastic spikes and the umpire was given the all clear after a check-up.
Watch the clip

Wigan vs Fulham, September 2012
Fulham midfielder Steve Sidwell brought Premier League referee Lee Probert into a game at the DW Stadium in September 2012. The player came sliding in for a tackle on a Wigan player but took Probert out instead. The referee did see the funny side of it and jokingly gave himself a red card for diving while he was on the floor.
Watch the clip

Mike Tyson vs Lou Savarese – August 2000
Boxing referee John Coyle was caught bobbing when he should have been weaving during a bout between former undisputed heavyweight champion of the world Mike Tyson and Italian-American Lou Savarese. In fairness though, as the referee rather than the challenger, it’s unlikely Coyle expected to have to duck at all. Tyson was later fined almost $200k for knocking the ref down onto one knee.
Watch the clip

Kansas City Chiefs vs Cleveland Browns, December 2012
An NFL referee was keeping his eye on the action during a fixture between the Kansas City Chiefs and the Cleveland Browns at the end of 2012. However, the touch judge would’ve been better off keeping one eye on the ball. A misplaced pass from Brady Quinn led to the football hitting the official squarely on the head, giving him a hefty knock.
Watch the clip